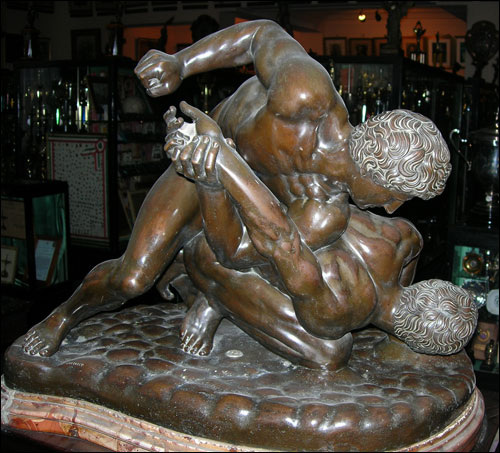 There are four types of wrestling we know today and these are: Greco-Roman, Freestyle, Catch, and Folk. Wrestling is one of the oldest, if not the oldest, sports man kind has ever created. While know one really know exactly when wrestling as a whole was created scientist have found drawings in cave that depict wrestling which date back as far as twenty thousand years ago. 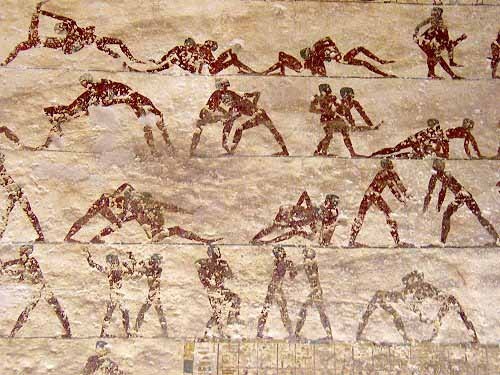 Wrestling in ancient Greece and Rome

Greco-Roman wrestling, as well as freestyle wrestling, the forms of wrestling we know today, found their origins in the lands of the eastern end of the Mediterranean Sea. Greco-Roman wrestling in one of the oldest sports in the world, if not the oldest. While no one knows when wrestling was created, scientists have found drawings in caves depicting wrestling back as far as twenty thousands years ago. While this is not Greco-Roman wrestling is was a raw form of wrestling which developed into four main styles of wrestling. These form are folk wrestling, freestyle wrestling, catch wrestling, and Greco-Roman wrestling. An ancient form of Greco-Roman wrestling was practiced in ancient Greece. Wrestling to the Greeks was not only an extensive part of a soldier's training, but also a part of their daily life. Youth did not only learn the typical subjects such as reading, writing, and arithmetic. The young men in ancient Greek society also went through tough physical training which was made up of the art of wrestling and a form of dancing. Young men were paired up together and taught this ancient martial art in their master’s palastra, or private exercise court built onto the school masters house, under an instructor’s supervision. These young men would practice countless moves and strategies in order to learn the art of wrestling so that they would one day become great Olympic champions. While a very few of these young men ended up being great Olympic wrestlers there were a few. However, most of the young men ended up becoming soldiers for Greece's army. Young men were were also taught wrestling while in the army, while this was not as efficient as the small wrestling classes in the palastra it crafted the young men into fine soldiers for the Greek army. The ancient Greeks kept this up until the rise of the Roman Empire. During the rise of the Roman Empire the Romans out powered the Greek army and seized control of Greece. After the Romans took over Greece they took traditional Greek wrestling and mixed in their own set of rules, and thus the most ancient form of Greco-Roman wrestling was created. The Romans rules stated that it was to be strictly upper body form of wrestling where all holds and locks were to be above the waist, additionally there was to be no tripping of one's opponent in any way. The Greeks severely disliked this new set of rules because their wrestling heroes were getting beat by Roman wrestlers. Wrestling to the Romans was much more than a sport or past time, they believed that only strength would conquer all and those who lost were weak. Their practices were hard grueling  it is even said that some participants even suffered from heat stroke and death as well as other illnesses during the practices.  However, the popularity of the sport fell after the establishment of the professional athletes and wealthy competitors who could bribe their way to victory.With this bribery became the way in which most wealthy men won wrestling tournaments and it was completely unfair. After the fall of the Roman Empire Greco-Roman wrestling was lost for hundreds of years until the French rediscovered it.

Re founding of Greco-Roman by French

Greco-Roman wrestling was later re-founded by the French. They set up the most of the rules we know today as well as the guild lines wrestlers follow when on the mat. They also drafted the first designated wrestling area in which the two wrestler could still wrestle but with less chance of accidental injury. This went on for some time and it still continues on. Due to Greco-Roman wrestling being re-founded in France the sport is most popular in Europe.

Greco-Roman Wrestling in The United States 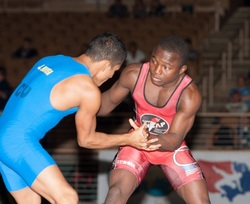